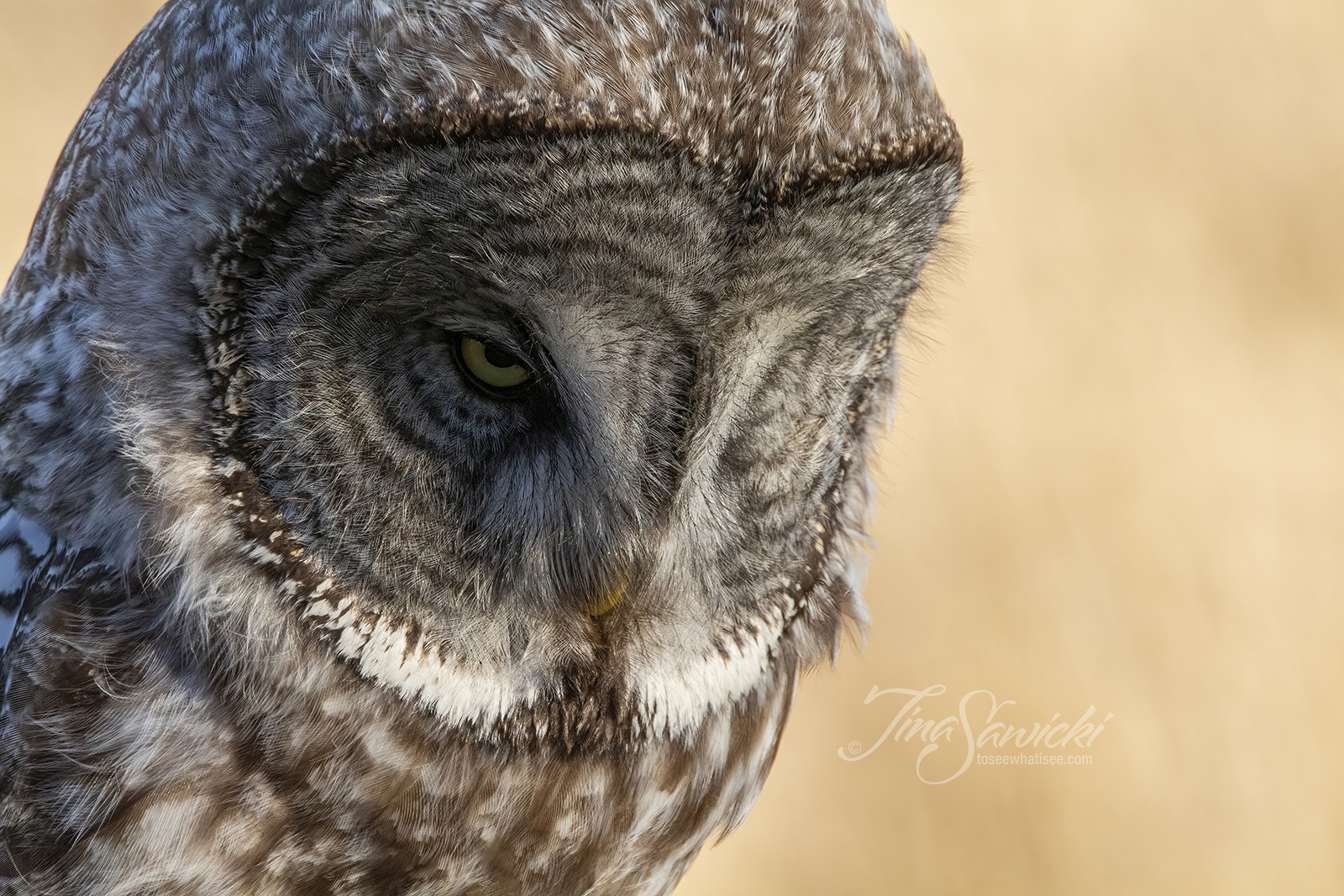 Since the weather and life hasn’t given me many chances to get out to catch any photos the last few days, I thought I’d share a bit about the one that started it all. I have been taking photos for many years with a point and shoot camera and other small pocket cameras but having a focus or passion for the end result was inspired by none other than the Grey Grey Owl.

I had been taking photos of birds, flyball, pets, flowers for years but for an unknown reason this moment changed everything for me. In April of 2017 I had heard from some friends there was a crowd of photographers down the road from where they lived. Curious, I decided to go check it out since I recently started to shoot with a larger lens and a DSLR camera. I am so happy I followed through on my curiosity, something I do often! I fell in love with birds but most especially owls and raptors of all kinds on that day. I couldn’t believe the majestic beauty behind these powerhouse bundles of feathers. I was hooked.

I visited the site several times during the short time the pair, as I learned later, blessed us with their appearance. It was during my time there that I met many fellow photographers who I consider friends to this day and started to learn more about different ways to capture the birds. There are so many times I wish I knew then what I know now with this interaction with these owls and had the awesome Canon EOS R5 too! At the time I was full of questions and loved that the majority of the photographers at the site were willing to share and explain so many things to me.

Another moment I’ve taken away from that experience is this was when I met Mike Bons, another local photographer, indirectly. I believe he is and was my mentor and someone who’s work I admire very much. He’s always been willing to teach and explain things in a way non-professional people can easily understand. I’ve actually taken a couple of workshops with him since. The most entertaining part is we didn’t actually meet during this time but I’ll never forget the two young boys urinating in the ditch right with the owl watching on. I was highly amused and when I finally did get to know Mike and realized these were his sons, it’s quite comical and life with those guys must be entertaining daily for his wife.

When I'm around other photographers, I'm never embarrassed to ask questions, even if they are stupid questions in my mind. If I don't have an answer, then I need to know. A few tips I was given by various photographers during that time was to attempt to use the light to highlight the shadows more if the opportunity arose, to get in front of the bird and attempt to interpret where it may fly next and not to make any noise or scare the bird.

Over the last few years of getting more serious about photographing wildlife and birds, I’ve learned a lot about ethics and how to not scare the subject you are trying to shoot. Baiting, which is frowned on terribly, is the act of using the favourite food of the bird or wildlife and luring it to eat and “pose” for the camera. There are a lot of photographers that get the most amazing shots using this method but it’s considered highly unethical and can give you a bad reputation. For example last year when I was photographing a Saw Whet owl in the Durham region, someone had nailed a mouse to a post near where the owl was sleeping. I overheard someone, I assume the guilty party, laughing about how the mouse was alive when they first put it there but it did not work for him. I was appalled by this and I do not ever use this method to catch my photos. Ever. And yes, of course I said something. Doesn't get you too far when it's something the photographer sees nothing wrong with.

The time I spent with these Great Grey Owls was something I’ll never forget. I’m incredibly envious of all the fabulous shots I’ve been seeing being posted lately so I felt a revisit to my original photos was necessary since my eye has changed so much. I was able to bring out quite a few of my original shots to a far superior quality with some post production editing.

This year is supposedly an irruption year for Great Grey Owls. That means food is in shortage for them further north so there are going to be higher numbers of them south for the next few months. I hope to be lucky enough to see one and catch some more memories and trust me, I have been looking. I've seen a lot of Barred Owls around and have even kept driving the last few times I've seen them unless they were in an amazing setting. That does show that there are a lot around!

As a side note, if anyone sees one on your property and it’s within a safe distance or after the lockdown, please contact me! There’s a free print in it for you. This goes for any other wildlife on your property or a solid lead to where I may spend some time capturing photos. Remember, I am ethical and will respect private property!