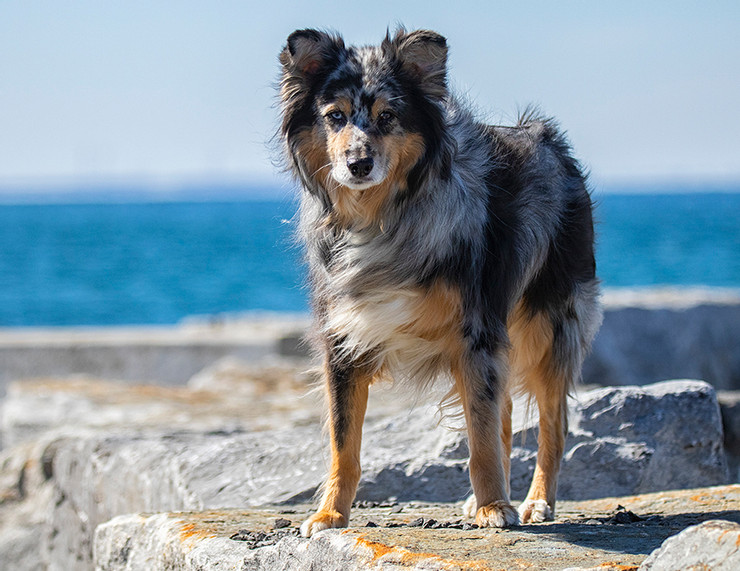 I have many reasons for getting out to capture shots but for me, this one was a new and personal one. I am a very big dog lover and have had three dogs for around 6 years now. Unfortunately my one Australian Shepherd was very ill for the last few weeks and had to be put down. It was a horrible experience but I wanted to take him for one last road trip once I picked up his urn.

I decided to visit Amherst Island since it was a favourite of mine and a place I’ve always managed to find peace and tranquillity. That combined with my photography, it was a great way to balance my heart again.

With the pandemic, riding the ferry is a bit different that it has been in the past. In the winter time, you always knew who the dedicated photographers were. No matter how cold, windy and snowy it was, they were always around the ferry railings shooting off the sides or scanning with binoculars. Passengers are no longer allowed to get out of their vehicles to protect the crew so there are many great photo opps that are missed by all. On this day on our journey across a spectacular Bald Eagle flew off the ice and over the ferry. It was one of those moments where you held your breath for a moment. I hoped that with this early view, the rest of my trip would be productive.

When I visit the island, I tend to avoid crowds or go on off days or days with off weather when I can. I, like many photographers and birders I know, are extremely respectful and take great care to avoid trespassing or damaging the island in any way. The love I personally have for the island has much respect and care as part of it.

One of my favourite creatures to capture are foxes. There is something about them that just catch my eye and give me such pleasure to just watch them, let alone be able to catch them thru my lens. I had heard there were several appearing on the island and had hoped that today I would catch a few shots.

For first 45 min or so I mainly drove around and watched the Rough-Legged Hawks and Northern Harriers hunt in the fields. Most shots were too far away to be of any quality but watching them sometimes is as much of a zen experience as well. I couldn’t believe how many deer were around, there were so many of them. I recall the last visit I had been wondering why I hadn’t seen any. I would normally see several on each visit. With this visit I saw least 80 without any exaggeration.

I was honestly starting to wonder if I was going to actually catch any shots when suddenly everything changed. I had only just turned a corner when I suddenly caught site of a Short-Eared Owl literally beside my truck. As I slowly stopped my vehicle (moving slowly when driving or walking is the best way not to scare off birds when birding from a vehicle. If a stop is necessary, do it slowly and gently and although you may still startle them into flight, you have more of a change of them staying put than if you suddenly slam the breaks on) a second Short-Eared Owl (SEO) appeared overhead.

For fear of them leaving the area I took a few shots from my window of my truck and then slowly eased myself out as they flew behind the truck. I simply stood on the road off to the side and watched them as they swooped around me and landing on the fence posts within metres of me. Sometimes they were so close I couldn’t catch them in my frame. They seemed to be watching me and very curious.

The only fear they showed was when a male Northern Harrier swooped in and bombed them. He came so close to me my photos cut him off as he flew by me. After a few moments the SEOs returned nearby and continued to pose for me and allow me to capture them. The time seemed to stand still and there was no-one around but myself and them.

I did get a bit cold finally and had to carry on but I was thrill to capture that moment. As I moved onward I came upon what seemed to be a young deer munching the dry hay in a corner of the road. I slowly stopped and managed to get several shots of her. She just looked at me a few times and carried on eating without running away like most would that were so close. Some may think it odd but I thanked her and carried on slowly without scaring her at all.

I did see several snowy owls and other wonderful birds but they were all much too far away or on wires and poles. I really dislike taking photos of birds on a wire or pole this days. I did my fair share of them early on as I learned photography and now I wait for nicer shots unless they are an unusual species or rare moments. Admittedly I was a bit disappointed moments later as I rounded the south/east corner of the island and caught the tail end of a Rough-Legged Hawk and a Snowy Owl fighting. I waiting for a time hoping it would start up again but it was like they were self conscious of the fight and didn’t want to be seen doing it. I just laughed and moved on.

Making my way back in the direction of the ferry I ran into a friend shooting the SEO’s flying around the field and decided to go back to where I had been catching the pair earlier. It was on my way there I did manage to catch a fast photo of a young fox crossing the road. For some reason it was absolutely terrified so instead of trying to get a better photo, I cautiously moved on and let it be.

Unfortunately by the time I reached the other side of the island, Mother Nature had another idea for me and decided it was to be extremely dark and not a species to be found.

It was a very good day and I felt a lot better after I drove onto the ferry to head home. I had my time with my dog Thunder and a bit of soul searching. On the Ferry home I spied two Snowy Owls on the ice. I know there will be other times when things are safer for everyone and we can all get back to the way we were.