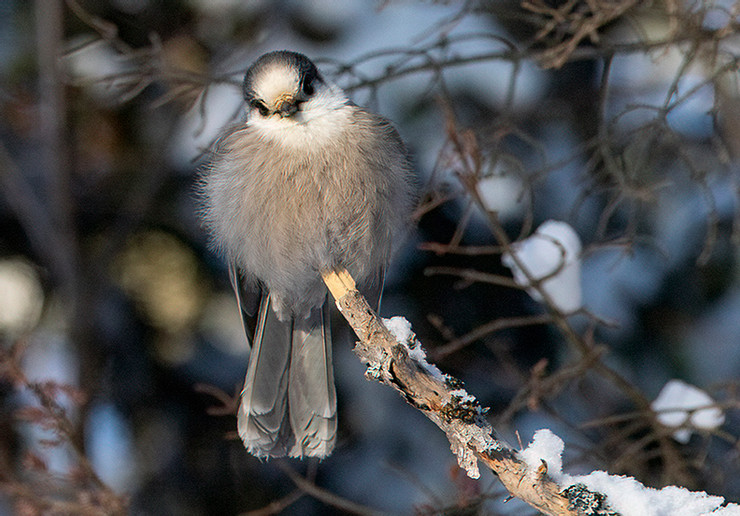 Winter! OMG … Well, not really. I actually don’t mind winter weather as long as the wind chill isn’t ridiculous. I grew up in Northern Ontario and always wanted to get the heck out of there as soon as I could because the winters were sooooo long and just too cold when I was a kid. These days I enjoy a good snowy winter day more than I enjoy a hot humid one.

Weather and photography? It’s pretty important to a wildlife photographer and can make or break a photo. I love to shoot in almost any weather except the rain and the only reason for that is my lenses are not waterproof and my camera is only weather proof and not waterproof. I know a few Pentax lovers that laugh when I say this since most Pentax cameras and lenses are waterproof. I’ve also had a lot of colleagues say they don’t like to shoot in snowstorms because it’s very difficult to catch the right focus since the camera likes to focus on the snowflakes. I’ve had that problem but I’ve also been able to capture many great snowy photos! I actually really enjoy shooting in snow falling. Today was an insane day for that!

Needing a break from life’s madness, I had made plans for this weekend to include a creative photoshoot and a day out on the road. Today was the road trip and I decided to run out to Wolfe Island even with the threats of snow squalls in the forecast. Following all protocols to stay away from other people, avoid stopping anywhere away from home and so on, I arrived on the island to just a bit of blowing snow. I should have actually taken the hint on the ferry when I actually started to get motion sickness from the size of the waves. Within moments the squalls started blowing.

I’m most grateful I do have a truck with 4WD and although it goes through gas much quicker, I spent the day in 4WD. I started at the mid-east section of the island but quickly changed my mind as this area is wide open fields and the wind and blowing snow was so heavy that the roads were covered in huge drifts which my truck slid through like butter! I did manage to see several large flocks of very puffy Snow Buntings and Common Redpolls but couldn’t stop to shoot them with the huge wind gusts.

Did you know when a bird looks larger or puffier than usual, it’s their method of staying warm. A bird’s body heat warms the air between it’s feathers and they puff up their feathers as much as they can to hold in as much warm air as possible.

I traveled west and along my normal route starting at Concession Rd 8 and working my way around the island. I’ve been lucky enough to see both favourites and lifers at this end of the island but today was not one of those days. There was barely a soul around, with maybe three cars and two plows on the same roads. At times it was very difficult to see. I persevered and actually took a few landscape photos but other than a few photos of Snow Buntings, I finally had to catch the next ferry and move on.

A positive note includes an awesome chip wagon at the ferry dock for Wolfe Island called the Mustard Station. I don’t normally stop anywhere but because I was early for the ferry and I was ten feet away from the cook and outdoors, I ordered a really really tasty Poutine to eat while I waited. Would definitely recommend it if you’re waiting for the ferry. It was while I was waiting I decided to make a pit stop at Amherst Island on my way home. I have been hoping to catch the foxes I’ve been hearing and seeing so many photos of lately. I also hoped the weather would be much improved although it is on the lake too.

I started out by looking for the foxes in the areas I’ve heard they are being seen but had no luck so went off to see if I could catch a shot of a Rough Legged Hawk. The Roughie (slang!) is one of my favourite hawks and I absolutely love the Dark Morph ones. I’ve been trying for a few years now to get a really nice shot of one but they spook easily and rarely stay close enough to catch a decent shot, even with a long lens. I was envious to see a photo shared by Mike Bons the other day of one that I wish I could catch! Today I only managed to catch a couple of far away flight shots after missing it take off from right beside the road! Lol

It was at this point the weather started up and the snow squalls started to blow up a storm. I took my time and enjoyed the beauty of the chunks of snow on the trees and the shapes of the drifts in the roads. I did manage to see several Snowy Owls (7), either too far away or on a post. I’ve had the great fortune to capture many shots of Snowy Owls and at this point I rarely want to catch a shot of one on a post or wire unless they are doing something spectacular. The weather wasn’t improving so I decided to do a fast run by the Short-Eared Owls area where they are normally seen since I hadn’t seen much of anything else.

For once I was thrilled to have the freezing cold hard blowing wind as, to my amazement, the owls wanted to fly into the wind and hunt on the opposite side of the road from where they usually hunt and above my truck. With the wind under their wings, their motion was slowed down considerably and I was quite happy with a few of my captures. It was fun to watch them dive down to hopefully catch a mouse. They seemed to be very unsuccessful today! When they were, another owl would chase it to try to steal the meal!

The light was getting a bit low at this point but I wanted to share a few photos of what it’s like when your camera catches the snowflakes instead of the subject along with some great shots I’m very happy with. I find that if I set my camera on high speed multiple shots instead of single shots, if I do focus on the snow, I can shift a touch and grab the subject correctly. The other “fun” part of shooting in a snow storm is the wind. It’s great that it helps slow the birds down to catch their motion easier but if you are shooting with a large heavy lens like my Sigma 150mm-600mm Contemporary, the wind can grab your lens and shift your focus to miss what you are shooting at. The only way to stop this is to use a tripod, even a monopod can be moved by strong winds. Unfortunately I wasn’t expecting to spend any time with the SEOs since I was going to catch the next ferry so I was hand holding my camera.

There were a few other photographers on the island today but I was alone with the Short-Eared Owls and they seemed quite unbothered by my presence. I somewhat wanted to stay a bit longer instead of catching the ferry but once again my fingers felt like they were about to fall off and I couldn’t feel my shutter button after only 10 min of shooting! I really need to find a solution for this.

After another quick look for the foxes with no success, I headed for the ferry and closed my day watching a Bald Eagle hunting on the lake as the light disappeared.