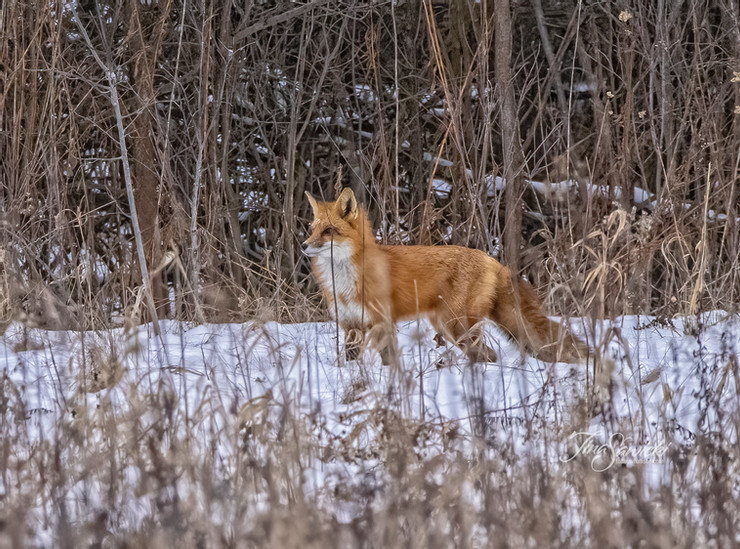 Do you ever have one of those moments where you capture something with your camera and you are filled with such a joy that you just want to dance? I’m sure you have. I know I have. More times than I can count. Today was one of those days. Kinda.

It’s been too cold to hike too long with the dogs and to spend too much time on the trails with my camera so I decided to take a drive to Carter Road. I took the back roads up thru Pulver Road, once again really happy I have a truck, and back up and around until I arrived in Consecon. On the way I was delighted to see a beautiful red fox cross the road in front of me but unfortunately he / she ran right into the sunshine so I lost track of it. I did note it had quite the black bushy tail!

Where and what was the excitement you ask?!

As I was making my way to the cove I was annoyed to see the cloud cover come in and start to darken the skies far too early since night came too early already. I would normally have not even thought about using my camera and Sigma 150-600mm lens in this type of light but since I bought my Canon EOS R5 I’m thrilled I can continue to shoot in lower light. I don’t always get the best shots but they are definitely better than they used to be with a bit of editing.

As usual, I’m scanning as I drive and I suddenly catch a flash of red in the field beside the road. It’s a Red Fox hunting! I was so excited. One of my favourite subjects to take photos of are Foxes. I think they are such a beautiful creature and their eyes are so intelligent. I’ve come upon them hunting before and was never able to catch a photo of them pouncing in the snow. If I do they are blurry and just not quite right.

Tonight’s opportunity had me playing with my settings as the light was so low and I truly believed I caught the shot I had always wanted to catch. I literally did a tiny dance when I caught the shot of it in the air (with the truck with people in it watching! lol) but you really never know what you actually caught until you get it on the bigger screen. I’m still a bit of an amateur when it comes to some of my settings and my eyes are terrible to see things up close so previewing on my screen on my camera doesn't work. Plus I believe I would have caught a better shot tonite had another vehicle not pulled up behind me and scared it away eventually but I did catch a few photos.

I’m not sure I’ll ever be able to repeat my experience capture a fox family last summer. A bit of an uprising occurred over my attempt to protect the fox kits from the Brighton Lawn Bowling club after they had been threatened and being a believer of things happen for a reason, it led to one of my most incredible photography experiences. It was through the publicity of this issue that I met a lot of people with Fox in their yards and I was invited to several places to shoot. I actually had the good fortune to gain a great friend from this experience as well. Nikki welcomed me not only into her yard but her home and heart and I’m thrilled they are still in my life.