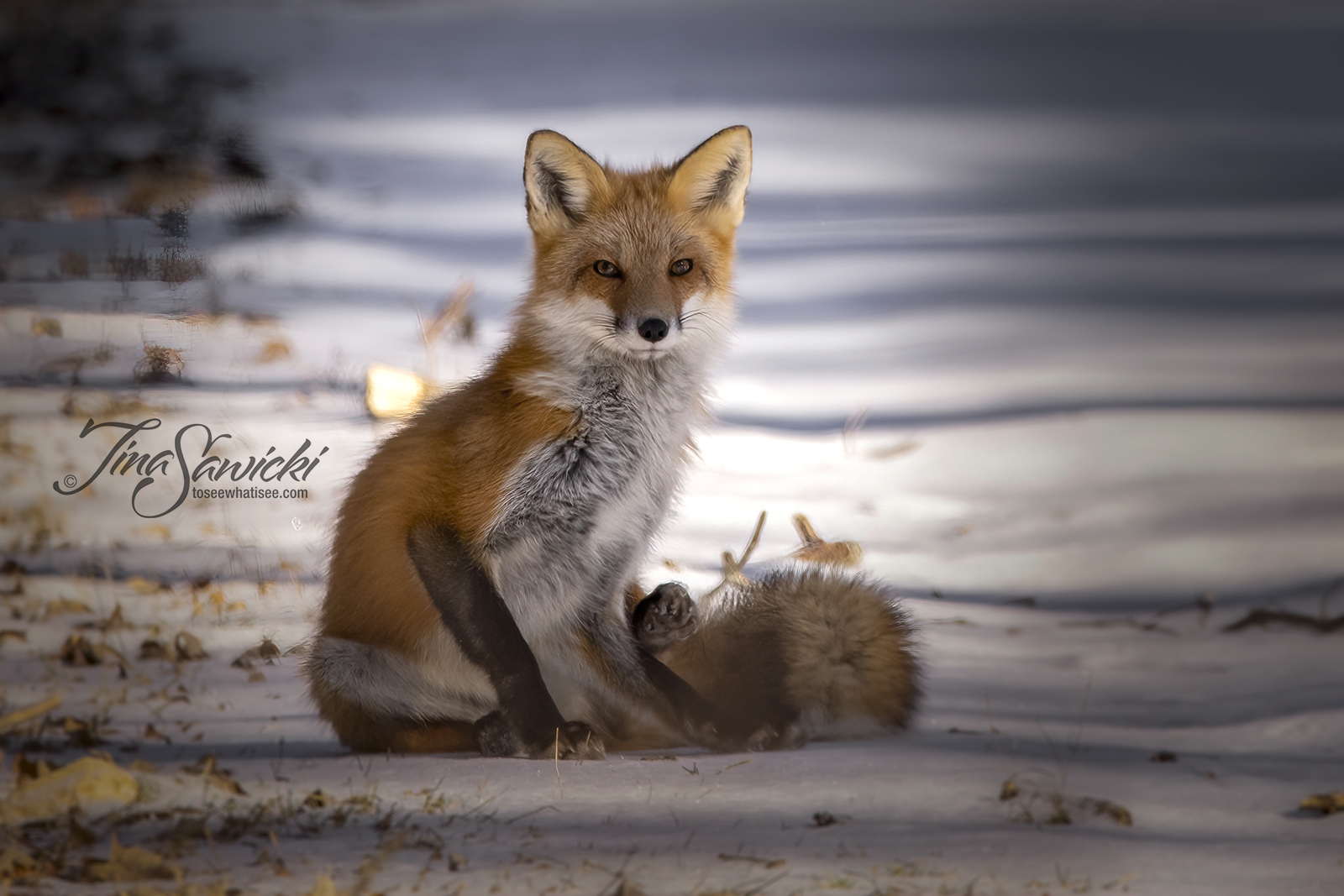 The weekend weather was incredible but very cold compared to previous winter days. The sunny skies made staying at home very difficult so with a second layer of everything and the dogs loaded in the truck, I started out heading south to the County, a not so distant destination close to home.

I had no plans other than a hope to see what I can see and to capture beautiful parts of the county and hopefully fit a couple of hikes in. The drive started out a bit dismally with hardly a breathing beast stirring. Wellington Harbour’s Snow Goose was sound asleep along with a few hundred Canadian Geese and mixed Swans.

Onward to the Sandbanks Provincial Park where a few sparks of life appeared in the sand near the cliffs with a collection of Dark Slated Juncos and Common-Redpolls flicking in the sand. The few clicks of my camera led to some disappointing results but watching their playful antics made it worthwhile. The park was busy as expected but the views and the drive around is always spectacular even with few sightings other than Canadian Geese and a handful of Long-Tailed Ducks. I had hoped to get a bit of a hike in while I was there but there were just too many people around for my comfort.

I was just about to give up on the park and was turning my truck around near the outlet entrance when I saw a flash of red off on the side of the road. I quickly jumped out and caught myself several photos of one of my favourite subjects, the Red Fox. Of course I was thrilled and if that was all I saw the rest of the day, I was happy. There were a few people hiking on the road and they scared it off but I was happy.

Next stop was randomly Kaiser X-Roads for a fast look since with the cold everything was frozen! This location is a fantastic stop for waterfowls in the spring and fall months. Occasionally you will find a rare sighting or two of a species that should not be in our area or is visiting during the wrong season and not normally seen. As an eBird member you can actually have a daily or weekly report of rare bird sightings in your area emailed to you for free. It’s a great way to help decide where you may want to go take photos if you’re looking for something specific.

As I was cresting one of the hills a beautiful and huge flock of at least 200 Snow Buntings swooped across the field and the road in front of me. They are beautiful to watch in action as their wings can flash a white pattern and when it’s a large flock of them, it’s something to see. Snow Buntings are very frustrating to capture as they move fairly quickly and blend really well into their backgrounds. Even with post production editing, it can be difficult to end up with a great shot.

Of course the attempt to capture them was made and by the time I was ready to give up I couldn’t feel my fingers from the intense cold. The area is wide open with nothing to break the wind coming from Lake Ontario just up the road. NOTE: If anyone out there has a suggestion for gloves to keep your fingers from falling off in the cold, I’d appreciate the input! Hot packs just don’t do the trick. The most exciting part of it all was just as I was about to give up and carry on my way, a smaller flock of Common Redpolls decided to land literally right beside my truck and give me the opportunity to catch some great shots of them.

The next stop was Waupoos Marina to take in the views. The only birds around were Mute Swans (An invasive species in this area and they just keep spreading!) and a few Canadian Geese. I did take a couple fun photos and jumped back into the truck to get warm as I headed to Prince Edward Point. Surprisingly there were a lot of people and cars around in my travels but everyone was respecting each others space.

Prince Edward Point is a favourite birding area of mine and a lot of other birders. In the spring it’s one of the top migrating areas for warblers and other species heading to their summer homes as well as the fall for the southern trip. It’s incredible how many you can see and when COVID isn’t an issue, PEPtBO hosts a great birding festival during the spring migration. It’s also home to the Prince Edward Point Bird Observatory and their banding station. I’ve volunteered there a few times and hope to again some time in the future. It’s fascinating to watch these beautiful creatures get studied and banded to be kept track of through their travels. It’s a great way to learn more about birds too!

I finally got a hike in and was able to do an eBird report which included a Lifer for me. A few people have asked me what a lifer is so I’ll explain. A great part of the eBird app is being able to keep track of all the species you have seen since you started to input. It’s really easy to use and it’s free. It’s something that you can use to keep a personal account of your birding adventures by tracking your movements, locations and keeping track of all birds you input. A lifer is a species you haven’t seen before that is new to your list. Most people only really acknowledge the more unusual ones or what I call goal birds. It can be, sadly, pretty exciting to catch that Lifer!

For me, the last couple years has been a focus to hopefully see and catch a shot of a Bohemian Waxwing. They are not the same as the Cedar Waxwings but are a bit larger and more grey in colour. I was thrilled to have seen 7 of them on Saturday!! The longer you are a birder, the more excited you get about these things. It makes me laugh to be honest. One of the biggest thrills is to find a rare specimen on your own and to be the first to see it. I’ve actually done that a few times and will share that another day.

The duration of the hike included an almost uncountable amount of Greater Scaup and Redheads playing in the small waves of Lake Ontario as well as a lot of time spent trying to see the Waxwings again to capture a photo since I was so excited to see them that I completely missed catching a photo as they flew off on me. Unfortunately I'll have to wait maybe another two years to see them to catch a photo.

I had also heard of a Snowy Owl in the area and had been on the watch for it. A family hiking told us to watch for it as it had just flew by as they walked by the lighthouse. I was happy to catch the female Snowy Owl along Long Point Road as I was leaving the park. She was kind enough to pose for me for a few shots.

That was my Saturday adventure. Sunday’s was to Presqu’ile Provincial park and then to Barcovan Cove because I was disappointed to not have clicked once in Presqu’ile. It was very busy at the park and made me believe things were hiding from the amount of people that were there. I had stopped to chat with a fellow photographer friend and he said the same thing. I did see a Barred Owl on Friddick Road outside of the park but did not stop as it wasn’t a great photo opportunity.

Barcovan Cove is always a hit when the weather is cold enough to freeze as a variety of Swan species flock there by the hundreds and more as the season moves forward - Mute and Trumpeter Swans are the most common. The cove rarely freezes over and allows the birds to feed during the cold months. Many people visit and feed them (Be sure to feed corn and not bread or rice as it’s not healthy for them!). It’s quite a spectacular site to behold and it's a great family outing as long as you don't scare the birds or throw things at them. Mind the No Trespassing signs as well. Among the swans you can also find a variety of waterfowl - today it was only Greater Scaup, Mallards and Common Goldeneye - and a ton of Canadian Geese. There was also a muskrat snacking on the ice.

My fingers managed to make it through the weekend and it’s back to work I go!