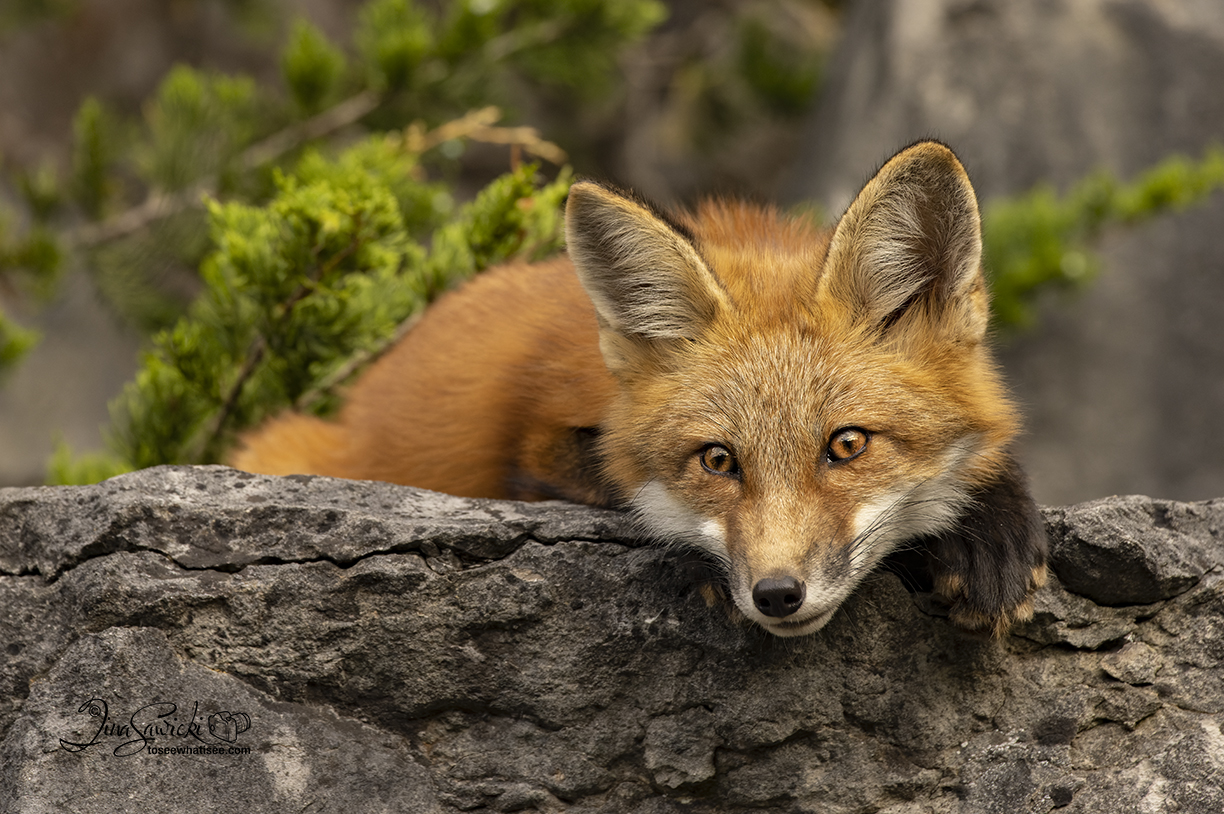 Finally! It’s the blog you’ve been waiting for!! Well sort of. There is so much for me to share about my experiences taking photos of foxes and their kits that you would be here all day reading. I'll likely do a few blogs on Red Foxes but tonight’s experience inspired my need to write my next blog on this subject.

Those of you who know me know that I have a little special place in my heart for the Red Fox. Most especially the kits but who couldn’t resist them. Unfortunately because they are so cute it’s actually really dangerous for them because people tend to treat them as if they were a domestic animal but reaching out to get them to sniff their hands, trying to feed them, talking to them and letting them get too close because, why? They can of course. Silly really. You can easily go jump off a cliff into a small water bucket below but would you just because you can? It’s really bad for a wild animal of any kind to trust humans. As we all know, all humans are not the same and just because you are kind to the creature, the next person to come along will not be.

An example can be people who walk their dogs near dens. The majority of foxes are terrified of dogs. Dogs will look at kits as prey and will hunt them down and kill them or chase them away from their dens in fear. The kits who have become comfortable around humans will be more trusting of a person walking their dog even though no-one can predict what that dog will do with a wild animal. This is another reason to not feed fox as they become used to being fed and will actually approach a human to be fed, sometimes refusing to take no as an answer. They can become bold enough to approach cars knowing food is being thrown to them and we all know that a 15lb fox kit isn’t much of a challenge to a vehicle. Believe it or not, feeding a wild animal can actually upset the ecosystem. Read up on it!

For this blog I’ll share how I approach fox and their dens and share my experience from this evening. When I’m out during the year hiking or kayaking or whatever I’m doing in the outdoors, I’m always scouting areas for different things. I’m not a top notch outdoors person but I’ve learned a lot in my life and know some things nature and what to look for. Come spring I will have spent many hours scouting out trails I’ve never been and looking for various things such as well traveled paths leading to hill type areas, holes that look like they have been used lately, left over kills and of course spotting the adults and watching their behavior. I also do a lot of research and pay attention to many different nature reports. I’ve also been very lucky to have been invited a few times to private property to shoot and have been told by some good photographer friends tips or locations.

I won’t share my locations with just anyone. I’m very careful about who I tell, if anyone, as invading the foxes breeding area is something one needs to be cautious about. If anyone has been to the Belleville waterfront (highly shared fox den), you’ll see a clear example on what happens when word gets out and too many people who are not aware their behavior is hurting the fox families are constantly intruding in their space. It’s a bit mad in the area and although I had been down there early on to shoot, I stopped going when the kits were being over exposed to people and there were too many “experts” trying to “protect” the kits. The father was actually hit by a car very early on and the mother raised her kits with another family for a while.

I was fortunate to visit them early on when they were just emerging from the dens and managed to spend quite a bit of alone time hidden behind trees and quietly taking photos and watching them. I posed no threat and maintained a huge distance between us unless they chose to come closer knowing I was there. I love that I own large lenses and can keep a decent distance without threatening them.

I did get fortunate this year to have found a few dens although none on private property even though I had several people watching for them for me. My favourite location has become my zen place and only a few photographers visit and it’s very quiet. I have gone there often and have always kept a good distance and never disturbed the kits. They have gotten used to me and do not get too bothered by my movements and such and I although they do attempt to approach me, I try to make sure I back off and stay a good distance from them. It gets difficult and I will not return for a bit longer to be sure they aren’t feeling too safe with me around them.

There are situations where you can’t control the interactions with the fox with other people and you just have to let it go even though it’s difficult. My time last year on private property was simply too short but the family and the single mom got used to me fairly quickly because the owners of the property interacted with them as well. They respected their wildness of course but it’s difficult when it’s in you property. They become treasures and start to take a bit of your heart.

So to sum this first blog on my fox adventures up, I have to share what happened tonight while I was shooting. The fox kits are comfortable with me, maybe too much but I am still keeping my distance and not allowing what I do to modify their behaviour too much although they play like kittens and it’s crazy! Tonight when I arrived I placed my belongings down on the ground and popped my keys down on my back pack sack. They normally look at my stuff but don’t bother with it. Well! This little devil tonight decided my truck keys were utterly fascinating!!! Thankfully there was another photographer there and he let me know that the little bugger had stolen my truck keys. As I looked it started to run off with them and I just about had a heart attack!! I had no idea where they would have ended up. I had to scream at it and thankfully it did drop my keys eventually but OMG I was just imagining have to crawl into a den hole and reach in for them or something. Crazy!

Of course I packed up my stuff a bit tighter and tied the bag up with everything in it. The little monster decided to obsess about it and kept trying to lift my bag but wasn’t successful. It was hilarious and so cute but wow, the headache that would have caused. I’m still giggling about it. This is a prime example of the kits being too comfortable with people and modifying their behaviour. So although it’s funny, it’s not a good thing either. I’ll know better than to leave my belongings on the ground for them to get to!

I’ll have to share more on my adventures shooting foxes again sometime!