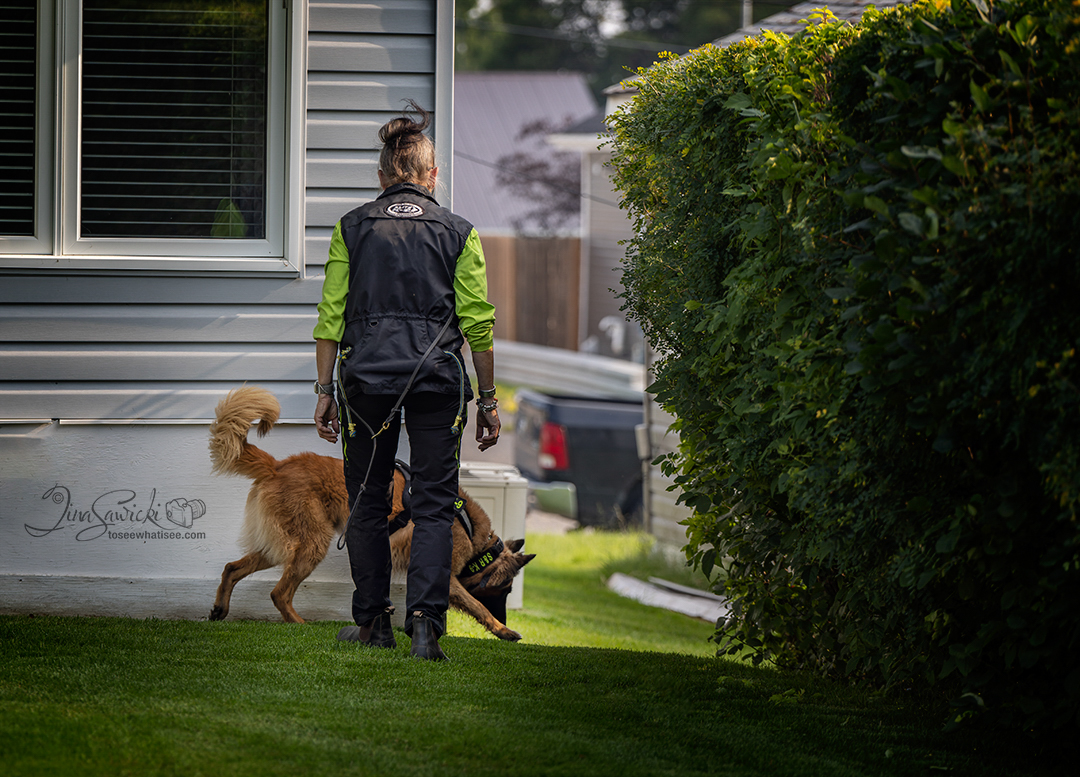 25 years ago, Melanie Ethier was a 15-year-old student at École Secondaire Catholique Sainte-Marie in New Liskeard Ontario. Sometime between 1:30 and 2 a.m. on Sept. 29, 1996, she left the Pine Avenue residence of a friend, to walk alone the one kilometre home and no-one has seen or heard from her since. Having grown up in Northern Ontario, I had heard her story many times and have seen billboards and many reports, news casts and more since. Her mother, Celine has never given up on finding answers about her daughter’s disappearance and on this particular visit home for me, I was able to be a part of the search for answers.

Pet photography holds a pretty special place in my heart and I love to do it and I also love to take photo of dogs in action. Dogs and other animals performing at their peak of training and skills can be extremely fulfilling and exciting for me to be behind my lens capturing. Most dogs just ooze their love of the sport or job they are performing and being able to capture this is a great feeling. Just imagine my excitement when I was invited to photograph and record Human Remains Detection Dogs in action.

I was attending a sporting scent detection trial (another favourite I love to capture!) in Tottenham and my friend Sherri Hall, who works her dogs in many different jobs (and I mean many!!!) told me she was going to New Liskeard to follow up on some new leads for Celine with her non-profit search and recovery unit specializing in human remains, Ontario Search and Recovery Canines. They offer their services, on a volunteer basis, working cold cases for missing persons to help bring closure to their families. Sherri is a fan of my photography almost as much as I am a fan of her many dogs and her skills as a trainer. She happily invited me to tag along on the search and was almost as excited about being able to capture the dogs working as I was.

I’ve trained three dogs in Scent detection, getting my training from Quinte Canine and various online sources. Sadly my Elite level dog passed recently and I miss him every day. It’s a great sport with a lot of amazing people. I’m always a work in progress as a handler and normally my dogs are way better than I am! Training is diverse and the theory of scent is fascinating. Being a part of scenting on a whole different level with Sherri’s group was pretty incredible and of course I was full of questions. I tried to be on my best behaviour and get my questions in when I could! I must say on the scent detection level, I certainly learned a lot!

The photography part was a bit tough at first. I was only able to record the garage area searches since the lighting wasn’t great. I was also only able to use my cell phone since video is not high on my list of things I know very much about but for what I use it for, my phone works great. There were five dogs there that day. K9 Talon Belgian Malinois, K9 Zula Belgian Malinois, K9 Ella - Black Lab and I hate to say I forget the names of the other lab and the White Shepherd. Two were the experts, one was green and two in training. It was incredible to to watch them work and their enthusiasm was amazing.

Capturing the photos was a bit of a job in itself. The light was bright sunshine and clouds so since I shoot manual, I was constantly adjusting for the cloud cover and bright sun. Lol Plus these dogs are fast!! You think you know where you’re going to catch them and they surprise you! I was grateful I understood scent and the way a dog will search so I wasn’t too terrible at following them but they were very very fast! I was pleased with the outcome of the shots and it was a day I won’t soon forget.

I am a bit awestruck by what Sherri and her group does on a volunteer basis. The emotional aspect of the searches is overwhelming. Celine, Melanie’s mother, was present for the searches of course. I had never met her but her excitement and optimism was contagious in the beginning. She was excitedly sharing stories and interesting things that have happened over the years. It was interesting to learn during the search that when my grandfather went missing many years ago, his body was found during a search for Melanie out in the woods. I’m not sure of all the details any longer but to realize how closely everything ties together is quite bizarre.

Sadly the leads did not pan out that day. Sherri knows how to do this to bring closure to questions that were left wide open and continued to search at every suggestion and hope from Celine. She hoped to eliminate more wondering and questioning for the mother and her emotional support of Celine was admirable. There are always so many aspects to every job. It was terrible to see the positivity slowly drain out of Celine as time went on. Each dog was thorough and any curious behaviours were cleared and proven to be nothing.

It was interesting to watch them show interest in a tool box the owner of the property had brought home from the mines after retiring approximately 5 years ago. There was absolutely nothing that could have been anything to do with Melanie in or on the box yet after exhausting the search area, the dogs showed interest on a handle on the box and initially a bit more interest on the floor around it. Adjustments were made without contaminating the area with additional outside scent and it was determined they were likely indicating on an old injury from the owner on the handle or the first aid kit that had been stored in it. Likely a previous cut had left some blood or some type of human remains that had decomposed there. It was simply fascinating to watch the process and behaviours of the dogs.

After the property we visited a cemetery in Haileybury where there was interest about an apparent lead in a trail behind it. It was here I was able to watch the dogs train within the cemetery after the search and take photos of them alerting on the newest remains or training with the tiniest drop of scent. The lab pup was able to find a hide (the placed odour) that was simply a tiny bit of accidentally spilled residue on a tissue the size of a nail clipping. It’s insane how sensitive their noses are. I would love to do this with a dog some day but I noticed it takes a physical toll on the handler too!!

Sadly for Melanie’s mother, there was nothing found but she did get some closure on the questions and leads she had received for the areas they searched and in a way, it must help. I’m sure she will never give up and I really hope someday she will get the answers she deserves. For me the day was enlightening and fabulous!! Thanks Sherri!! And many kudos to you for what you do!